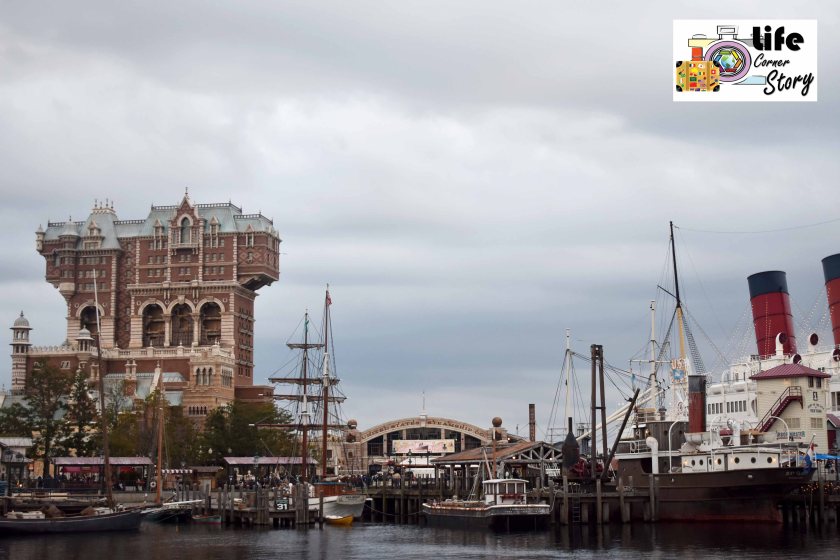 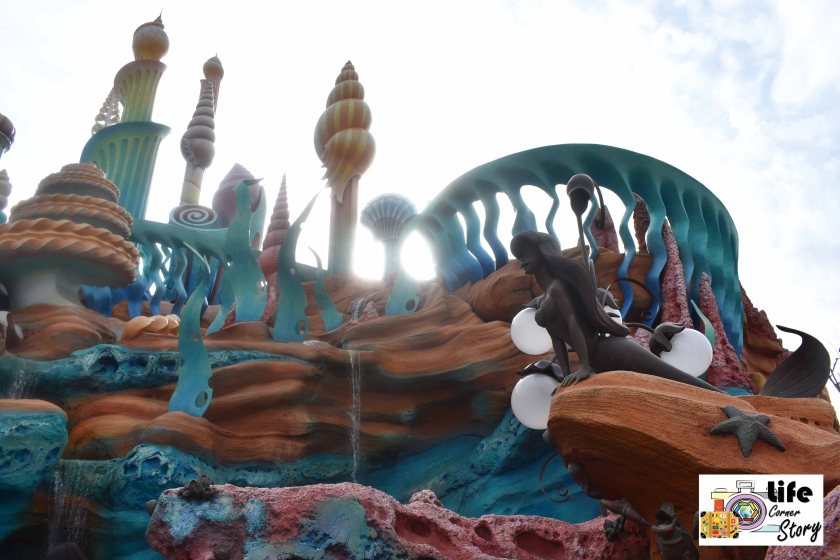 In DisneySea, after watch the excellent show in the“Lost River Delta”, we continues our journey. But this time we are not a scary adventure, in the graceful world, in the world of Ariel, the little mermaid and her aquatic friends is filled with fun. This colorful and lovely area of the attractions park is geared toward young children.

“Mermaid Lagoon” is built to look like the Palace of King Triton and features fanciful seashell-inspired architecture, its recreates the feeling of being underwater. In Disneysea, the Little Mermaid and her fish friends allows us to enter the undersea world, explore the caverns and peek at Ariel treasure. The sea-themed area of the indoor park host to Jumpin’ Jellyfish, Scuttle’s Scooters, Flounder’s Flying Fish Coaster, Blowfish Balloon Race and The Whirlpool.

Come and join a musical concert is about to start in the kingdom under the sea. Ariel is nowhere to be found, who dream will become human. We enjoy and pleasant to listen Ariel song and music with visuals and dynamic performance.

We say goodbye to Little Mermaid Ariel, let us go to “Port Discovery”. In Disneysea, Port Discovery, this futuristic marina located across the horizons of time. In the Aquatopia Attraction we try out some of the experience, with board into Aquatopia to move and spin with unexpected danger go through the rocks, a lagoon amid waterfalls and whirlpools. 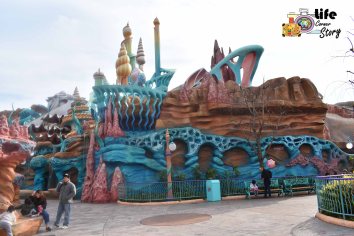 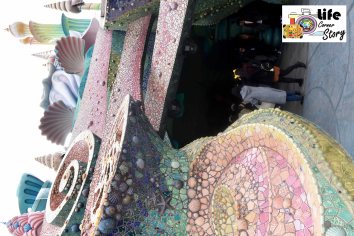 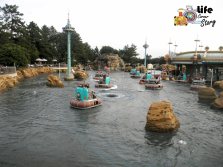 Nemo! Nemo! Where are you, we want find you! Oh where is Nemo? Come and follow us board a submersible and finding Nemo. Sneak into the Ocean, a journey through a unique adventure across the ocean and exploring the marine life. Of cause, we meet Nemo, Dory and Marlin and everyone is familiar with the Disney star. It immerses you into the worlds of Finding Nemo.

However you also ride into an elevated electric trolley, with the 2ft6 in (762 mm) narrow gauge DisneySea Electric Railway, to and from the American Waterfront. A beautiful DisneySea America harbor that is somehow familiar, even through its your first view it.

Arrived at America Waterfront, we walk into another time tunnel, the early 20th century of New York, New England and Cape Cod with themed harbour. You’ll find both the excitement of the big city and the charms of a New England village in this vibrant themed port. In America Waterfront, this city’s backstory revolves around the wealthy Harrison Hightower III, whose power grew stronger amid New York.

We take a leisurely stroll in the full of American flavor, walk in the New York City, Main Street USA and American Adventure. America styled of department stores and restaurants complete with an elevated railway, a classic American Theater and a harbor displaying a large range of boats, these aspects contribute to give this area more America Street feel. American Waterfront boasts more places to eat than any other area of the Park. In DisneySea, we are so happy for eat the America Style of fast food set with reasonable price.

In America Waterfront, it can easy view Harrison Hightower III, his S.S. Columbia and his Hightower Hotel, symbols of his might, until he mysteriously disappeared after snatching a cursed African idol. In New York stands the hotel knows as Tower of Terror so called after the mysterious disappearance of its owner in 1899. 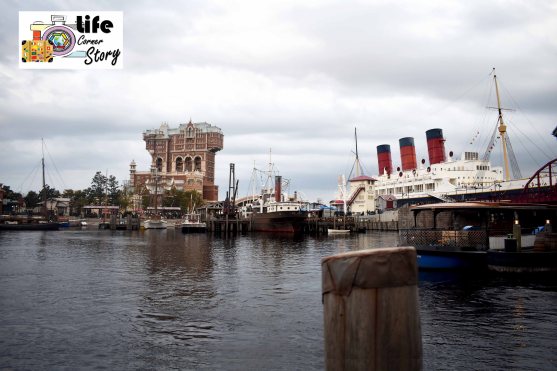 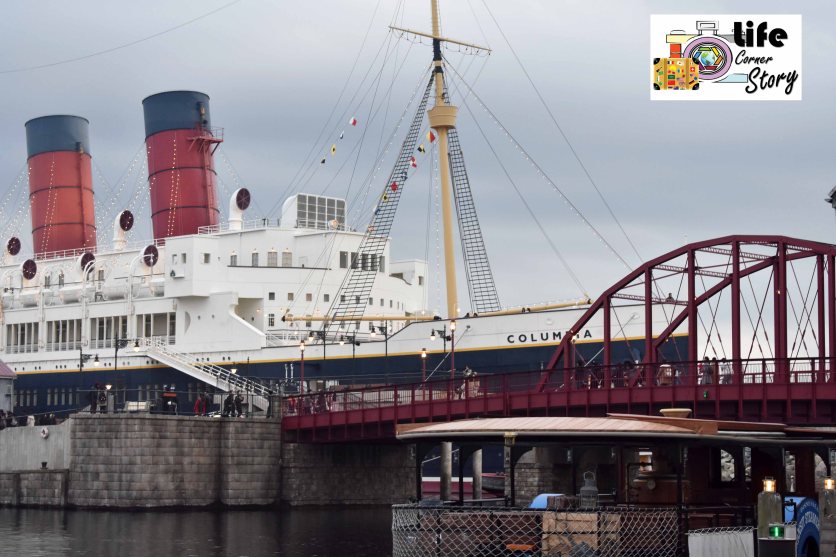 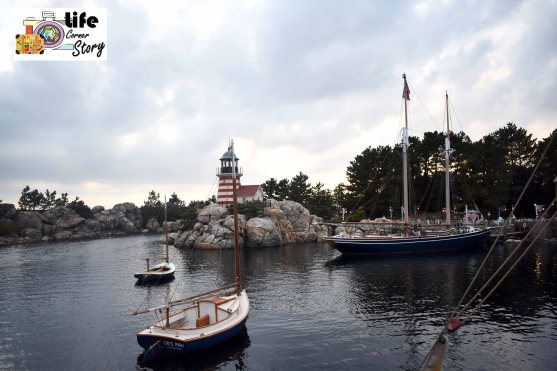 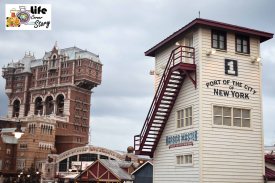 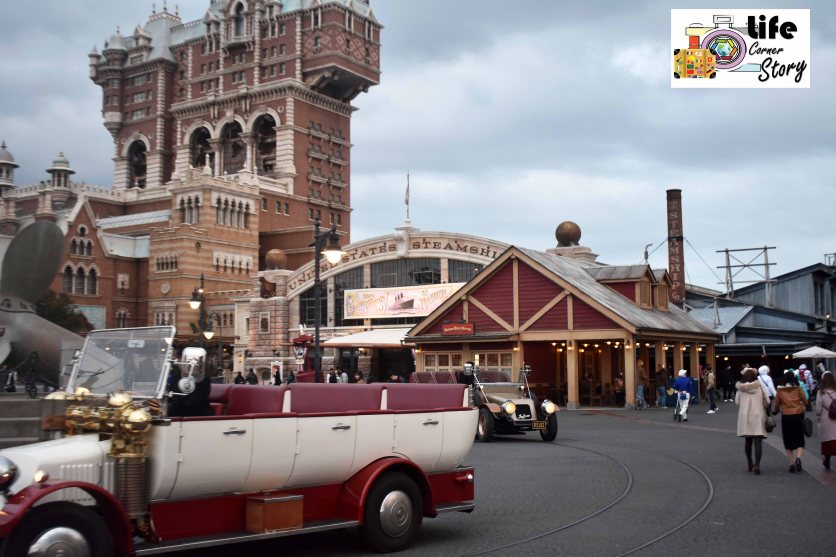 This is the real story, a background story of Harrison Hightower III was to hold a large-scale banquet in his luxurious Hotel Hightower to announce his acquisition of a strange statue named Shiriki Utundu, recovered on an expedition to a remote region of Africa. As Mr. Hightower was taking his statue to the hotel’s penthouse apartment, the elevator inexplicably came crashing down to the ground! The statue was the only thing found in the elevator; Mr. Hightower mysteriously disappeared without a trace. In the latter period, “New York City Preservation Society” considered the Tower Hotel to be a “historic building with high value” and therefore carried out the restoration of the hotel. It stated give tour to the public.

But what happen when you take the elevator to the top floor. A terrifying experience await you. It’s classified as a thrill ride, but what makes this attraction so fantastic is a brilliant buildup to the heart-stopping climax. It became one of the popular rides in the Disney Sea.

You can also board one of the big city vehicles were popular in the early 20th century, right when automobiles began to take over from the horse-drawn carriages. Old fashioned automobiles that take us on leisurely drive through the City and we fell like born as 20th century New York City in style.

We love Broadway-themed and it is one of the big attractions in DisneySea. This is a first-rate theatre which play the show “Big Band Beat” with features dancers and a live band playing swing and jazz tunes from the 1940s. But the time of our visit, the show is rest. Oh! Really want to watch! 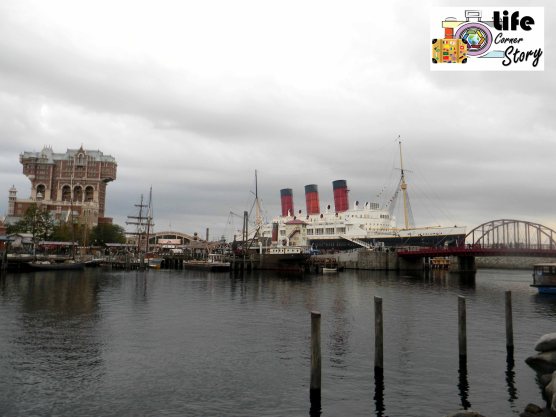 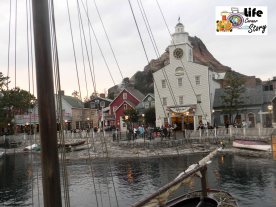 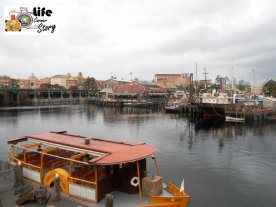 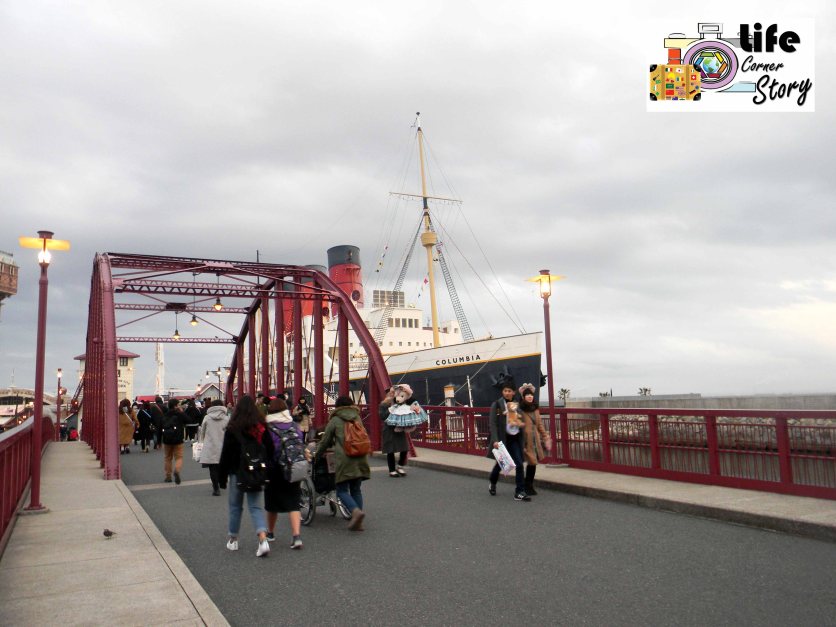 However, you also can join another 3D theme park, Toy Story Mania. Board a tram and play some fun carnival games with Woody, Buzz and their pals. Because we have watch the 3D show in the “ Arabian Coast”, so decide not to participate.

First class entertainment, enjoying a fantasy-story, a various active in adventures, cheerful ambience and various of attractive scenery are a big reason why at least 2 day visit in Disneysea, can be more relax for enjoying all of them without feeling boring. 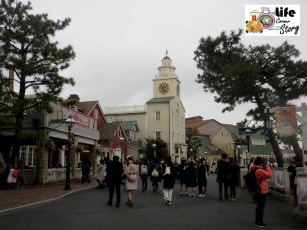 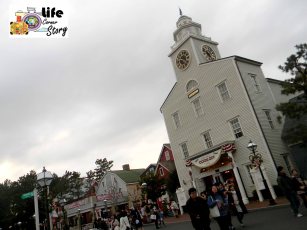 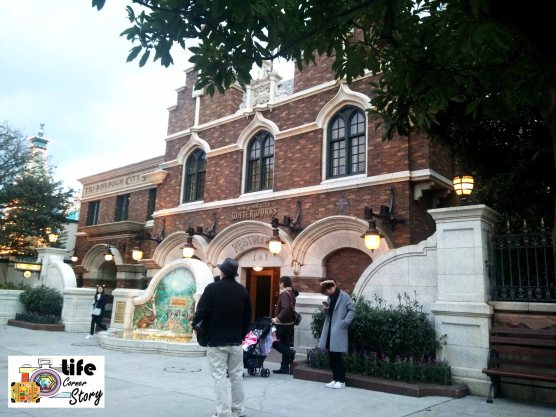 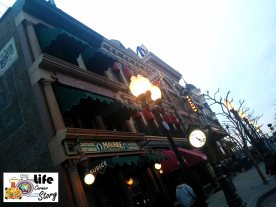 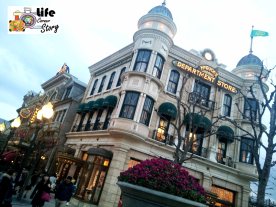 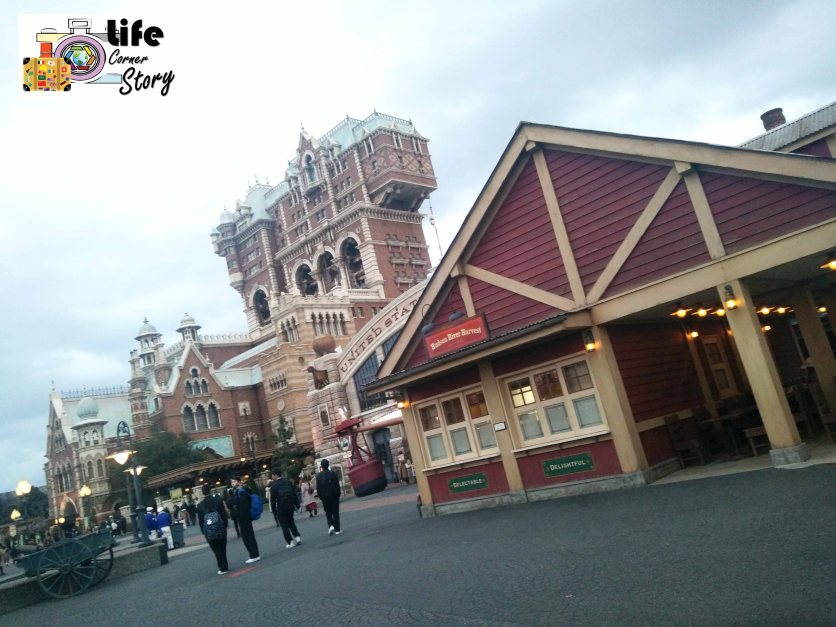 Fantasmic! A big, essential part of what makes the DisneySea wonderful. A nighttime spectacular on the waters of “Mediterranean Harbour”, this spectacular entertainment features Mickey Mouse as the Sorcerer’s Apprentice who creates a fantastic world of Disney through his powers of imagination. Filled with special effects using gigantic water screens, lasers, lights, and fire, this dramatic show promises an evening of unforgettable fantasy and excitement for all. Characters from popular Disney films such as Aladdin and Cinderella appear on the huge water screens. And the climactic scene has Mickey fighting a gigantic dragon in this magical and dynamic nighttime spectacular in Mediterranean Harbor. The perfect way to end of our DisneySea trip with the spectacular Fantasmic!

Although we previously watched nighttime show at Disneyland in Shanghai. Of course, it is not the same kind of nighttime show, but for us, they all provide the best and pleasure of entertainment with different visuals and feelings. 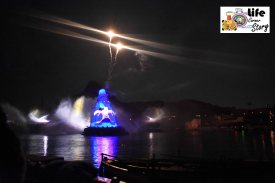 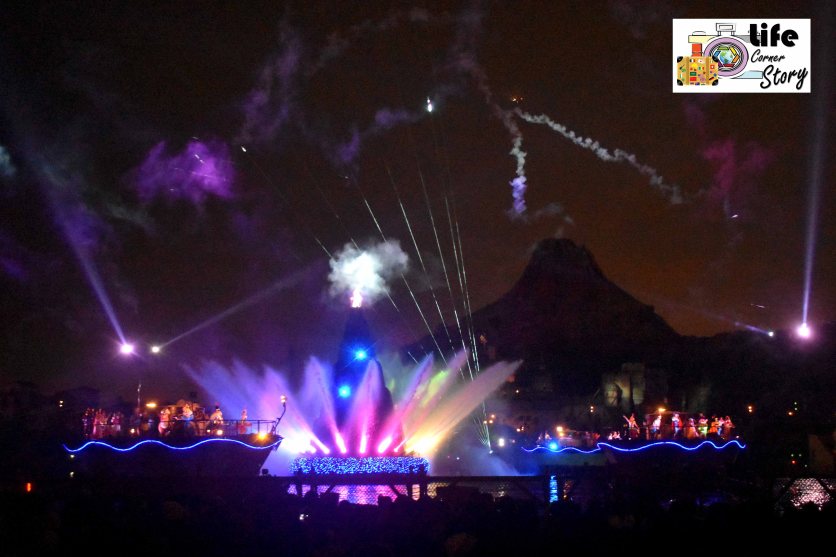 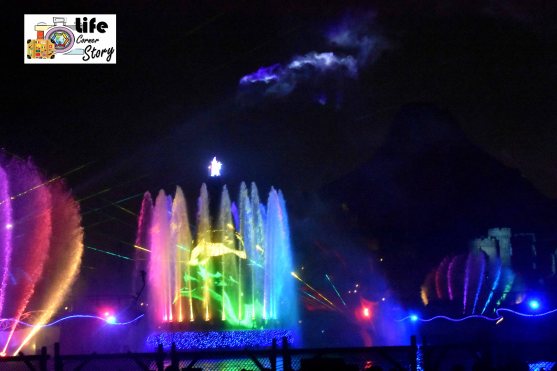 With different seasonal, Tokyo Disney Resort are sell different themes of Disney goods. While our visit is March 3rd, Doll’s Day or Girls’ Day. So We bought Mickey and Minnie in the shape of ornamental dolls.

This year April 15, 2018 through March 25, 2019, the special anniversary event, “Tokyo Disney Resort 35th ‘Happiest Celebration!’. Congratulations to friends who went this time. Kicking off the “Tokyo Disney Resort 35th ‘Happiest Celebration!’” is the premiere of this grand daytime parade. Mickey Mouse and his Disney Friends take Guests to a world of fantasy and imagination.

We believe it will bring more surprises and limited products to the public. We really really want to go for one more time.